We take on any kind of demolition job – residential, industrial, or commercial demolition. We continually update our skills and equipments to offer a diverse range of demolition services to our customers satisfaction. Making our customers happy and content with our services is what we strive to do with Deconstruction Demolition and Disposal Inc. Call us today to geta quote or if you have any questions on our services.

Our commercial demolition services include:

We Understand Our Customers

We value your time and we provide our commercial demolition services with YOU in mind. We know that any kind of construction, renovation or demolition is important to you. That is why we have the best estimators to deal with any of your demolition issues. We are reachable by phone, web or e-mail. We are fully accredited to provide demolition services as a licensed and insured demolition contractor, ensuring that we protect both you and our employees at every demolition job we undertake. We observe the highest standards of safety and cleanliness in all our commercial demolition projects. We clean up after every job and leave your property neat and tidy upon job completion. 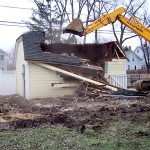 When scheduling your demolition services it is always best to let the company know ahead of time on what exactly you will need and by what time frame. this gives the Demolition Services Company a better idea on the job ad the estimate for your wallet. this can greatly help reduce the amount of time and frustration that can happen when expectations are not brought to the forefront. Once a time frame and fee are agreed upon, getting your demolition services completed at a guaranteed time is much easier.

This Demolition Services Company has got you covered and can do most any job as long as you give them an advance notice.

How to Get an Estimate from a Demolition Company

2. Schedule a Time for Your Estimator

Remember you want an in person estimation. Don’t fall for a “internet estimate” or a phone estimate.

3. Meet with Your Estimator

Remember you don’t want an oral estimate or a phone estimate. Sure, an estimator for a demolition company may say, Oh I think this will cost X.” But you want that in writing or it means absolutely nothing.

Remember for large or complicated  demolition projects you may need to solicit more than just three estimates. You may to get five or more before finding a demolition company you are happy with.

Demolition contractors wh are desperate for business often will hire writers (either in the U.S. or overseas, mostly from India) to pump out hundreds of fake reviews to be posted on various review sites. Many demolition contractors will also ask their employees (or retain an employee full time) to write reviews for their company.

So how do you separate out the fake reviews from the real reviews?

People who have had a specific experience generally speaking have very specific memories to go along with that experience. Think back to losing your virginity. How would you describe it if your life depended on it. Would all you have to say is, “Well I lost my virginity and it was great. Highly recommend!”? Probably not.

Generalities and brevity are your first clues when it comes to spotting fake demolition contractor reviews. Regardless of whether someone had a great experience or a terrible experience, they’ll probably go into some fairly deep and sharp specifics relating to their experience with that particular demo contractors. A person who just had their pool removed and had a good enough experience to warrant taking the time to write a review will have more to say than just a single sentence.

A lot of unspecific, one or two line reviews is a pretty decent tell that you are dealing with a lot of fake reviews.

This scenario generally plays out something like this. A demolition contractor is hired by a homeowner to remove some concrete. He pulls a classic bait and switch, and charges her a lot more than what he estimated. That person, rightfully, goes to the internet to warn others off that particular contractor.

A day or a week later a new review pops up. And its from a guy who also had some concrete removal done and had a completely opposite experience of the last reviewer. Even to the point of calling that reviewer out specifically.

People are often oddly territorial about the companies they love and hate. I’ve seen grown men get into fights about whether Canon or Nikon made a better camera, for instance. But when it comes to demolition contractors this is often a swarmy tactic used to drag down a legitimate review and make their company look better than it probably is, which leads us into …

Internet reviews are never perfect. People have outsized expectations of what a business can and can’t do. And when those expectations aren’t fulfilled they often take to the internet and holler about it. So when you are reading reviews of anything, even demolition contractors, its pretty normal to find one person that had a bad experience. However, a lot of bad reviews with similar complaints probably form a pretty accurate portrait of a bad contractor.

But, wait, a minute, there is one guy who really loves this one demolition contractor! Could he be a lone wolf crying in the wilderness?

No. Mostly likely that single good review was put their by  a demolition contractor who felt like his business was on the ropes from bad (and I would guess accurate) reviews. So he made an account (or his brother or his mother) and posted an accurate review … of himself.

My rule of thumb is mostly good reviews mixed with some mediocre and one or two bad reviews equals accurate. A lot of bad reviews also equally accurate. One good review isn’t enough to shift the weight of the people’s gestalt.

One of the darker corners of the internet is the space where demolition contractors who want to quickly build a good reputation or combat a string of lousy reviews buy internet reviews. The going rate for skilled U.S. Based reviewers is around $25 to $50 a review, and these reviews can be hard to spot.

And what they get is, “Hello good sirs of the Pages that Yellow. I hired the above nice gentlemen to demolush a pool in my bath room. His work was of a superlative nature. Would highly recommend upon the altars of Vishnu. Praise be to the four stars!”

One immediate tip off of a fake review is misspellings and tortured phrasing. Misspellings aren’t uncommon on the internet (gasp) but look for obvious 8th grade and under misspells. Then look at the phrasing.  Grammar was assassinated a long time ago by that coward known as the internet but people have a distinct way of talking about things in America. And typically this colloquial phrasing is completely lost to the reviewers in New Dehli.

The copy paste review has gotten rarer because internet review sites realized that their existence hung upon their credibility. But every so often a proton torpedo slips past and lands in the reactor shaft of life. Every so often copy and paste internet reviews get posted.

These are easy to spot.

For instance, “I love these guys! I would high recommend! Very professional pool demo!” — Gary

Followed by, “I love these guys! I would high recommend! Very professional pool demo!” — Larry

In conclusion, there is no real way to verify every review you read. Chances are that some of the best reviews you read may be carefully constructed bits of artifice made in the foundries of a copywriter’s forge. But if you practice a certain amount of discernment and a skeptical eye, you can keep from getting fooled 80% of the time.

5 Warning Signs of a Bad Demolition Company in Los Angeles

1. A demolition company in Los Angeles that won’t give an estimate

Estimates are pretty common in both construction and demolition. Be very wary of a demolition company that won’t provide an estimate or will only provide a free “phone estimate”. Either one is completely unacceptable. You should get an estimate in writing an accept no substitute.

2. A demolition company that’s “new” or doesn’t have a lot of years of operation

3. A demolition company in Los Angeles that isn’t licensed.

4. A demolition company in Los Angeles that refuses to provide references

5. A demolition company that demands money up front

2. Demolition Contractors Just Dump Everything in a Landfill

3. Demolition Contractors are All the Same

What Is Deconstruction Demolition?

An experience demolition contractor removes fixtures from a home. A demolition contractor may also remove tile and flooring to be reused elsewhere. Beams and lumber can be recovered as well. So can copper piping and even wiring. Anything that isn’t damaged (and even a few things that are) can be recovered from a building or home under deconstruction.

5 Demolition Services You Can Probably Do Yourself

5. Small structure demolition — Often times small structures like sheds and free standing garages outlive their usefulness and become broken down beyond repair. Luckily these structures are often fairly easy and straight forward to teardown. Save yourself money and tear down a shed yourself.

4. Kitchen demolition — Kitchen remodeling is actually fairly straightforward do-it-yourself project. The key to kitchen demolition is a Go slow approach and a patient hand when removing cabinets, counters, and fixtures.

Warning Signs of a Bad Demolition Contractor in Los Angeles

Most of these warning signs are easily detectable. A few require a bit of detective work, but doing your homework early will save you money in the long run.